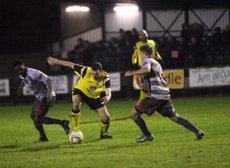 Ahead of our record equalling FA Trophy 1st Round clash with Frome Town, we look back at the incredible 2016/17 journey.

Next weeks match against Frome Town is only the second time in the clubs history that it has reached the First Round of the FA Trophy. This season's cup run has already seen victory on penalties, overturning a 2-0 deficit at half time to win and a commanding derby victory in the last round. As we continue our build up to the match, we thought it was a great opportunity to revisit that record breaking 2016/17 cup run.....

The Millers started their 2016/17 FA Trophy campaign with a bit of a scare against league strugglers Bridgwater Town.

Despite featuring an injury stricken lineup at Fairfax Park, North Leigh flew out of the blocks early taking the lead inside 5 minutes. A killer through ball over the top of the defence from Eric Odhiambo sent George Seacole on his way who calmly stroked the ball into the top corner for his 11th goal of the season.

No more than ten minutes later though they found themselves trailing after two quick fire goals from danger man Syd Camper. The first coming from a corner kick, the second a simple counter attack.

As the match went on fears of an early exit grew and after going it at the break still losing, manager John Brough would have been delighted to see Roger James' outstretched foot poke home Aaron Woodley's cross right on the hour mark.

Substitute Chris Murphy had a chance to win it for the Millers in injury time but his shot struck the inside of the post meaning the two sides would have to settle for a cold Tuesday night replay.

Three days later and the replay at Eynsham Park brought with it more competition success after already breaking the club record reaching the 4th Qualifying Round of the FA Cup.

Once again there was a strong start by North Leigh who took the lead on 10 minutes through long serving winger Morgan Williams. The game settled down after this with something of a stalemate as both teams cancelled each other out.

With less than 20 minutes left on the clock Bridgwater were given a lifeline when striker Jamie Laird, formerly of Plymouth Argyle, fired past Connor Thompson to level things up.

With less than ten minutes left and extra-time looking more and more likely, no one could have foreseen what was about to happen.

First, Roger James reclaimed the lead converting Morgan Williams' cross at the back post. Four minutes later and it was clinical goalscorer who added a third for the Millers firing into the bottom corner after a blistering run through the defence. And then finally it was James who wrapped up the proceedings in injury-time scoring his second and completing a truly insane end to the replay.

Winning their opening FA Trophy match for a third season in a row helped set the confident foundations for their 1Q round tie away to Yate Town which produced their biggest victory in the competition to date.

It was a very fast start to the game with captain Michael Hopkins shooting just wide of the post after just 24 seconds and it wasn't much later before the Millers opened the scoring. Once again it was George Seacole who netted with 18 minutes on the clock and just three minutes later he bagged a second with a cheeky back heel shot in front of goal.

Despite North Leigh growing in confidence with a two-goal cushion at half-time, they shot themselves in the foot just a few minutes into the second half when Jon Else committed a foul in the box. Yate's top scorer Jack Ball comfortably converted the resulting penalty kick and halved the arrears.

With the hosts pushing for an equaliser, momentum swung once more when Eric Odhiambo finished off a near perfect counter attack to make it 3-1.

Entering the final quarter of the match it was the Millers in the driving seat and they were about to step it up a gear. Super Seacole completed a well deserved hat-trick on 67 minutes after a great piece of team build-up play.

The flood gates opened ten minutes later when centre back James Fawke made it five before a top class performance was rounded off four minutes from time when Jon Steedman headed home Matty Woodley's corner.

When the competition draw was announced fans would have felt an undeniable sense of dejavu with the Millers having to face Ryman League Premier Division Folkestone Invicta for a 2nd time in the season. Having pulled off an incredible upset beating the Kent side 3-1 in the FA Cup, expectations were high of a repeat performance despite the fixture taking place at Cheriton Road.

If you were a few minutes late getting to your seat then you were in for a big surprise. Four minutes into the match and the hosts already had a daunting 2-0 lead.

An unfortunate Matty Woodley own goal inside 60 seconds was followed by a 2nd less than three minutes later when club top scorer Ian Draycott thumped home past keeper Manny Agboola from a corner kick. The match looked out of sight before it had even started.

The visitors were in full charge with centre backs Stuart Hole and Dan James regularly finding themselves at full stretch to halt the dangerous Invicta forwards. Seconds before the first half ended though, the Millers were handed a lifeline. Lance Williams watched as his right-footed shot squeezed inside the post to halve the deficit.

Conceding on the stroke of half time clearly impacted Folkestone's confidence and with the introduction of Roger James at the half, North Leigh added to their attacking options and troubled the hosts' defence.

In the 72nd minute, the inevitable happened and the Millers scored an equaliser. Goalkeeper Tim Roberts was helplessly beaten but none other than George Seacole who's 20-yard driven shot went just inside the left post.

Shortly after, Lance had a first time left footed volley thunder against the crossbar and then on the 82nd minute, the unthinkable happened... North Leigh took the lead!

Seacole fed the ball into the overlapping Lance Williams who, after beating two defenders, fired in a low shot from the edge of the area deflecting off one of Invicta's players and wrong-footing keeper Roberts.

With just a few minutes remaining and all three substitutes on the field, Folkestone stormed forward but misplaced passes and strong defence prevented any serious threat on the Millers goal.

As the final whistle fast approached, there was just enough time for Oxford United loanee GK Agboola to make a few superhero saves and help earn his side a historic cup victory.

The Millers continued their historic cup journey with another big upset, this time against Ryman Premier Division side Kingstonian.

As the scoreline suggests, it was a very close affair and the result would not have gone the way it did if not for the heroics of 19-year-old Manny Agboola.

Kingstonian striker Joe Turner was a constant threat and looked like putting his side ahead in the 19th minute. Turner’s fierce shot seemed goalbound, but Agboola somehow got a hand to the ball despite a deflection.

With George Seacole closely marked, it was left to Lance Williams to have North Leigh's best chance of the first half, but he fired just wide from Wayne Turk’s pass.

For the first 15 minutes of the second half, the Millers were pegged back, defending stoutly at several corners.

However the hosts were dangerous on the break with Seacole, Woodley and Roger James always likely to cause problems and so it would prove to be.

With 66 minutes on the clock, the deadlock was finally broken when Aaron Woodley latched onto a cross from the left on the edge of Kingstonian’s penalty area. Having his back to goal, he controlled the ball, swivelled and hit a superb left-foot shot that flew past keeper Robert Tolfrey into the far corner of the net.

Now trailing, Kingstonian intensified the pressure, but with Stuart Hole and Dan James both having excellent games at the heart of the defence, the North Leigh backline held firm and completed yet another shock victory.

Having already made history by reaching the Emirates FA Cup fourth qualifying round for the first time, manager John Brough’s men were having a season to remember.

Having already started the day off on a high making history for reaching the First Round Proper of the FA Trophy for the first time, things got even better when super striker George Seacole scored inside the first minute.

After former Football League player Jamie Cook beat his man and rounded the keeper, he squared it to Seeks who tapped home for his 21st goal of an unbelievable the season.

The lead was fairly short-lived as the home side struck back midway through the half when captain Kieran Lavery headed back across the face of goal for the unmarked McElligott to nod in.

Despite the great start, the Millers were fortunate not to trail at the break as moments after equalising, South Park had two great chances to score again. Lavery came the closest seeing his header crash back off the crossbar before a counter attack allowed Kofi Quartey clean through but sliced his shot horribly wide.

The Millers regrouped and started the second half brightly. Seacole fired just inches wide four minutes after the restart, before Cook blasted well over following a poor punch from goalkeeper Callum Thomas.

However, it was not until after Hopkins was shown a second yellow card 20 minutes from time for a late challenge on Jerry O’Sullivan that the ten-man Millers enjoyed a sustained spell of pressure.

Seacole had the chance to win it in the final minute, superbly controlling an excellent through ball to get in behind the South Park defence, only to be denied by a terrific last-ditch challenge.

With neither team able to steal it at the death, an exhilarating Tuesday night replay at Eynsham Park was in store.

Going into the replay, manager John Brough knew it wasn't going to be an easy tie. Visitors South Park had shown their intent causing a shock upset of their own away from home knocking out Oxford City in a 2-1 victory in the previous round.

Eternal glory would await whoever came out on top with an away trip to ex-Football League giants Tranmere Rovers on the cards and a record setting round in the competition for either side.

Once again it was a strong start from the Millers but they found themselves behind right on the half hour mark courtesy of their own doing. Goalkeeper Manny Agboola brought down Kofi Quartey in the area and Kieran Lavery slotted home from the penalty spot.

Unable to make any real impact in the game, visitors South Park doubled their lead with 59 minutes on the clock. It was danger man Quartey once again causing problems for the defence and was unmarked in the box to head home a deep cross.

Nine minutes from time and the match was put to bed when winger Jerry O'Sullivan's mis-hit cross went in off the woodwork leaving Agboola as a spectator.

As time ran out, the result looked beyond doubt. A late flurry of excitement saw Jamie Cook convert from the penalty spot in the 88th minute but it proved to be a consolation goal in a crushing defeat to end a truly sublime cup journey.

Next Tuesday will be a momentous occasion in the history of North Leigh Football Club, victory will secure the club a place in the Second Round for the first time ever!!

Don't miss out on what could prove to be one of those "I was there moments" for Eynsham Park, secure your match ticket now... https://northleighfc.ktckts.com/event/nlf2021h20/north-leigh-v-frome-town