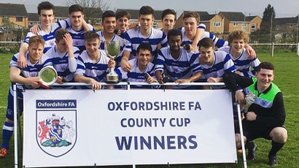 Manager Craig Dore has further strengthened his squad signing local talent Elliott Heritage as he fixes his eyes on a playoff spot.

The 21-year-old attacking midfielder is well known to Craig and the current players having started off in the youth ranks at Oxford City playing in their U13, U14, U15 and U16 sides before a two-year spell in the U18 side under then OCFC coach Craig Dore.

His time at City saw plenty of silverware come his way winning two county cups, the league cup and reaching the 3rd round of the FA Youth Cup. If that wasn’t enough then he has also represented the county playing for the Oxfordshire FA winning the Regional Cup. Elliott started the 2019/20 season with Clanfield 85 becoming one of the first names on the team sheet.

During the day he is a very skilled hairdresser at the Blunt Rabbit in town, a regular supporter of the Millers, and with most of the team on his client list he is always getting the latest gossip. Having trained for the last few weeks with the first team, manager Dore is finally giving the hard worker an opportunity.

Commenting on his new adventure, Elliott said he is “really excited to sign for a club with such great ambition for the future and at such an important time of the season”.