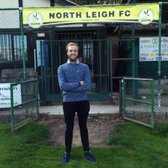 Budding youngster Edward Martin has been announced as the new chairman of North Leigh Football Club for the upcoming 2019/20 season.

Commenting on his appointment Edward said, “I am honoured to have been elected as Chairman of this fantastic club and I will continue to devote a lot of my time and efforts towards helping us make further progress. We’ve got a lovely little ground in the heart of the Eynsham Hall estate grounds, a very experienced management team and a plethora of skills and enthusiasm amongst our volunteers but the support from our fans and local community really was the deciding factor”

He takes over the chairmanship from local legend Pete King, who last month announced he was taking a step back to enjoy his retirement after 51 years of service to the club that he helped reform as a player back in 1967 but has insisted he will still be involved at the club in some capacity as it is a true passion of his.

Retiring chairman Pete King told us a lot of thought has gone into his decision to retire and who would be best to appoint for the future of the club. “I personally was in no doubt Ed was an outstanding candidate for this role and it was the correct process to consider all options. Having done so, I was delighted to recommend to the rest of the committee that Ed be my successor and was equally pleased to receive their unanimous support.”

The 23 year-old, who only moved to West Oxfordshire a little over a year ago, is set to become the club’s youngest ever chairman and one of the youngest in the history of non-league football. As a fan for the business end of the 17/18 season, he first joined the committee last summer noticing Pete King’s appeal for help and was elected onto the committee as the Commercial Manager.

“He has worked hard this season building a strong commercial infrastructure for the club and has already begun implementing a long-term development plan. His communication skills and business foresight were apparent from day one bringing a fresh view of the club’s objectives and vision.” said Club Secretary Sharon James.

The newly elected chairman continued to say “It will be very hard to follow in the footsteps of Pete King after his long and fantastic service to the club. It’ll be a big task to take the reigns after all the success he has delivered.

“We are competing at the highest level in the club’s history and despite a village population of only 2,000 people we are going up against teams in major towns and cities with tenfold our annual budget. But despite this, we as a committee still believe there is huge potential for the club to further grow and I can’t wait for the challenges and hopefully successes that lie ahead”.

“I understand that Rome wasn't built in a day but we are looking to put plans in place to give this club a strong platform for the future and are confident of achieving our ambitious goals.